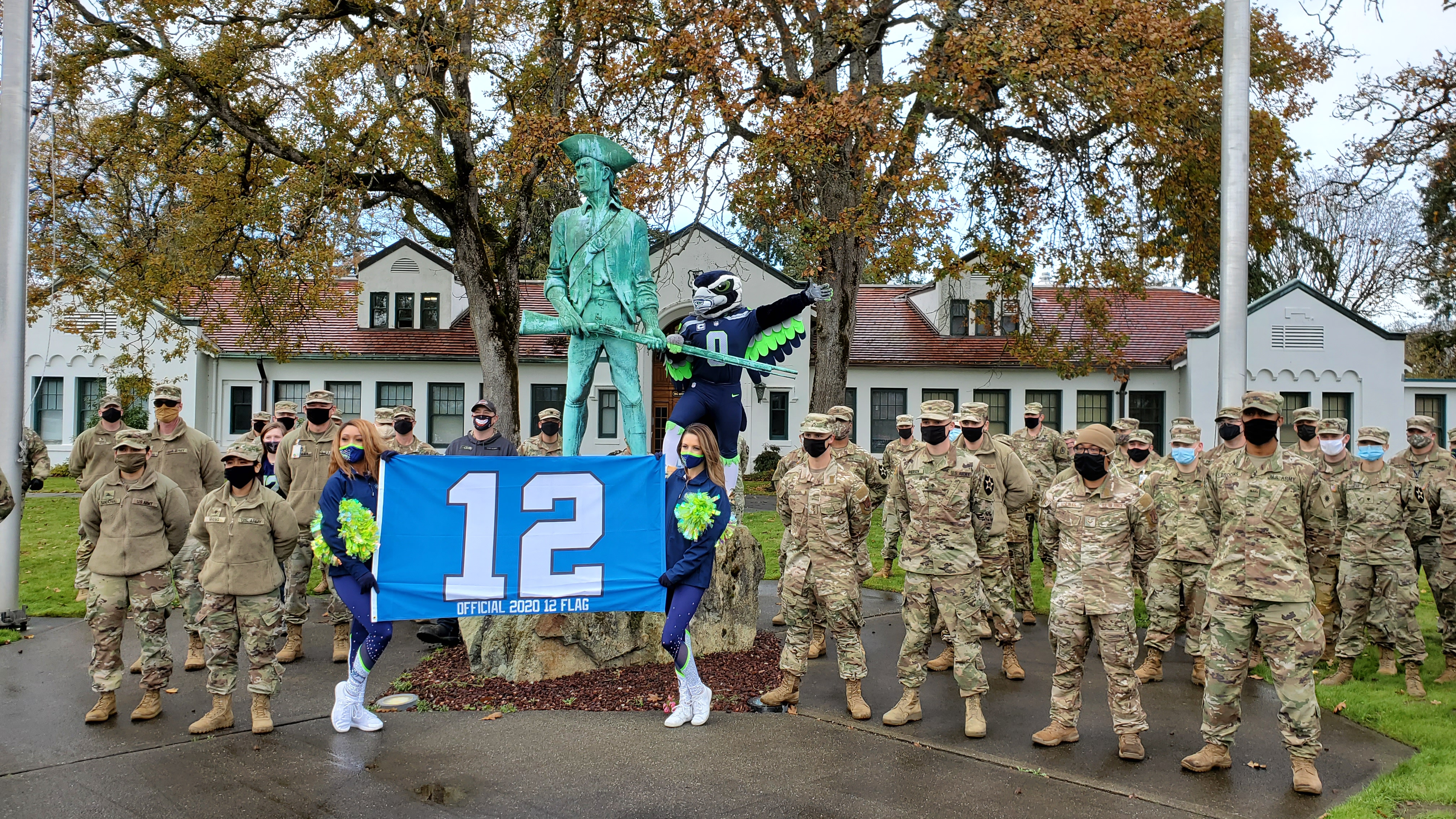 On May 7, 2022, the Seattle Mariners honored military members and veterans during their annual Salute to Armed Forces Game at T-Mobile Park in Seattle. Citizen-soldiers and airmen stood side by side with players as Sgt. 1st Class Tramal Williams, a recruiter with the Washington Army National Guard, threw out the ceremonial first pitch for the game. This yearly event has become part of the growing tradition of local sports teams honoring the men and women of the Washington National Guard.

“Our Guard members are so eager to get out on the field and represent the organization,” said Maj. Gen. Bret Daugherty, the adjutant general. “Whether it be throwing out a first pitch or standing on the baseline with the players, they are excited to root for their team.”

Earlier this year, Daugherty represented the Washington National Guard in front of the crowd at Climate Pledge Arena with Seattle’s newest professional sports team, the Seattle Kraken of the National Hockey League.

Since most Guard members live and work in the communities they serve, the relationship with Washington sports teams runs pretty deep. When the Seattle Seahawks won Super Bowl 48 against the Denver Broncos in January 2014, it was the Washington National Guard that drove the team through the streets of downtown Seattle during the victory parade. A month later the Seahawks brought the Lombardi Trophy to Camp Murray so members of the Washington National Guard could take photos.

“Just to be on the ground, carrying the Lombardi Trophy, celebrating with the team, the fans and everyone down there was so magical,” said CSM Eric Sandland, 96th Troop Command CSM. “Our Guard members got to cheer with the fans, celebrate with the players and make a memory they will never forget.”

Every year when the Seahawks call for a stadium flyover, it is the flight crews from the 96th Aviation Troop Command that answer the call.

“There is nothing like flying above a stadium full of screaming fans, knowing that if I wasn’t in the helicopter flying, I would be in the stands cheering,” said Maj. Kevin Robillard, a pilot with 1st Battalion, 168th General Support Aviation.

Another element of the Washington National Guard, the 10th Civil Support Team, can be found at almost all major Seattle sporting events and working behind the scenes to help keep spectators and players safe. Since 2012 members of the Civil Support Team have teamed with Seattle Fire and hazmat teams for radiation sweeps and monitoring the air for dangerous substances.

“This is really a public health and safety function. We essentially are running a sweep and helping ensure that the public is safe from bad chemicals,” said Warrant Officer 2 Daniel Jones, 10th Civil Support Team, during a 2015 interview.

While the stadiums were empty in 2020 due to the COVID-19 pandemic, that didn’t stop the Seahawks’ cheerleaders, “the Seagals” from coming down to Camp Murray and raising the 12th Man flag, honoring the Washington National Guard as their Military Unit of the season.

“The Seattle Seahawks relationship with the Washington National Guard is extremely valuable to us,” said Nino Gray, community engagement manager with the Seattle Seahawks. “We know that when we call, they will answer because the service members are from Washington state and big supporters of the Hawks.”

“My family loves the Mariners. My husband is a huge Mariners fan and I have wanted to sing the National Anthem at a Mariners’ game for as long as I can remember,” said Scheer. “So when I got an email from the Mariners, I was like, ‘what, me?’”

Whether it is baseball, football, soccer or hockey, the members of the Washington National Guard have a passion for their favorite team and when they get the chance, they want to come out to the stadium to support the team and show their pride as a member of the home team.

“The Guard is built by people who love their state and want to keep it safe, so being able to stand there in uniform and hear that crowd cheer for me, that was a special feeling,” said Williams, reflecting on his opportunity to throw out the first pitch. “It is a memory that I will always have and one I will always enjoy.”