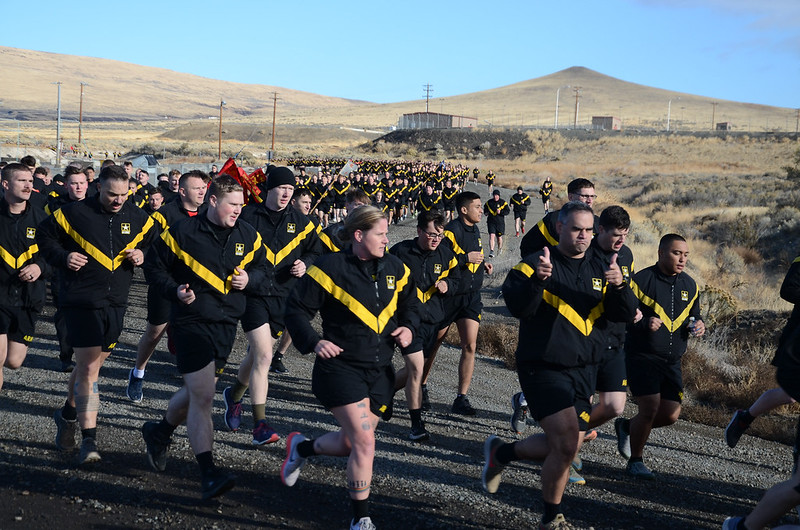 On a cold but sunny morning in Eastern Washington, approximately 3,700 soldiers from the Washington Army National Guard ran in lockstep through the rolling hills of the Yakima Training Center, proudly carrying their unit flags and building esprit de corps following two years of an unprecedented operational tempo.

“We rally here together today standing shoulder to shoulder with our brothers and sisters in arms to remember our fallen heroes, recommit ourselves to being soldier first, driven by the big 6, and to strengthen the foundation that we will draw power from moving us forward in the coming months and years,” said Brig. Gen. Dan Dent, commanding general, Washington Army National Guard during his speech at the event.

Dubbed “Rainier Stampede,” the event kicked off during the late morning hours of Nov. 5, 2022, with a 5K organization run. The event exercised the Washington Army National Guard’s critical mobilization support functions while enriching the service of, and providing unified purpose, direction and motivation for all soldiers while taking part in Army Combat Fitness Test events and a leadership development summit.

“We’re going to bring the leadership teams together and we’re going to talk about the command philosophy,” said Command Sgt. Major Eric Honeycutt. “See where we were at two years ago and then look at where we’re at today. Hopefully we can continue to make this organization better.”

The last two years have been historically active for soldiers of the Washington Army National Guard, with ongoing missions to support the state’s COVID-19 response, as well as law enforcement partners responding to civil disturbances both locally and in the nation’s capital. Additionally, the previous two years included significant overseas deployments, with more than 2,000 members deployed on missions around the world.

“Since before World War I, from Europe and the Pacific to the Middle East, you, the soldiers of this Guard and this Army, have been there and you continue to travel down that hallowed trail every day,” said Dent.

Joint Services Support providers, numerous employers and other community resources were on hand for the soldiers attending the event. Washington National Guard Museum Historians provided select unit history assets to provide exposure and educate the force on the organizational history. Soldiers that attended also were treated with a barbecue meal prepared by the Washington Army National Guard’s culinary specialists.

The last time Dent and Honeycutt held a similar leadership summit was just prior to the COVID-19 pandemic in January 2020. The most recent summit helped educate newer officers, non-commissioned officers and warrant officers that have more recently joined the Washington National Guard and provided the members that previously attended a chance to discuss best practices, share knowledge and learn from senior leadership and one another.

“We thank you for making this commitment today. We thank you for making the sacrifice to take time away from your families and other endeavors to stand together in this formation in the critical and honorable profession of arms,” said Dent. “I am proud of you and I am so deeply honored to serve alongside each of you as you continue to serve this great state and the greatest nation ever formed.”