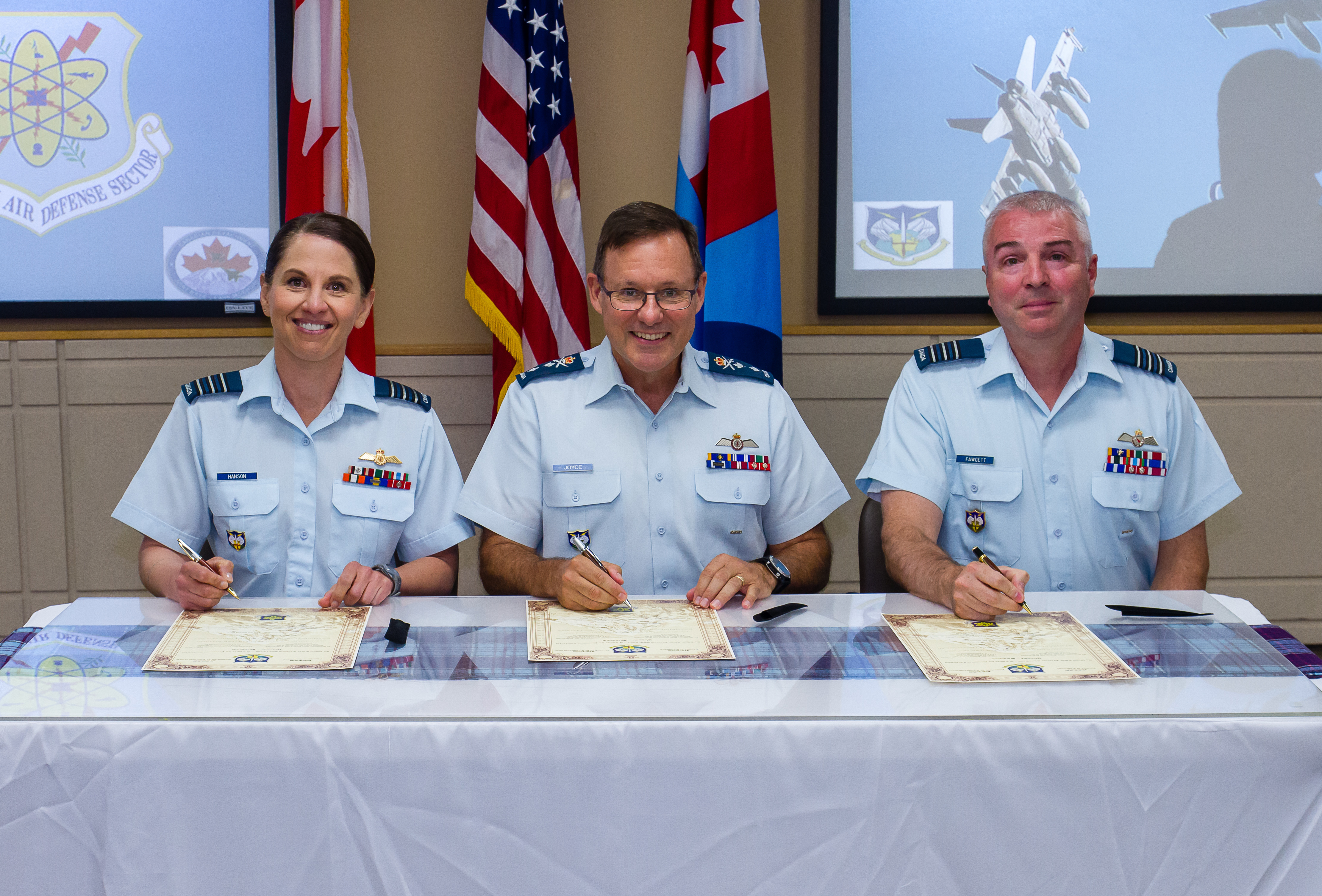 Fawcett is transferring to RCAF Warfare Center in 8 Wing, Trenton, Ontario, Canada. He will be leading the Air and Space Integration Program which is look at how Canada will execute Joint All Domain Command and Control (JADC2) what the Canadian Armed Forces call the Pan-Domain Force Employment Concept (PFEC).

Rather than exchanging flags, as is the American military custom, Joyce, Fawcett and Hanson signed the change of command scrolls (formal orders).

During her remarks, Hanson commented on how obvious the high standards are at the unit. “Bigfoot members walk with a purpose and a sense of pride permeates the building. Pride that stems from the unit’s long NORAD history of conducting air sovereignty operations with precision and expertise since the late 1950s.”

Hanson is proud to be serving in a bi-national organization that “exudes a strong culture of innovation.” She is impressed with WADS ability to modernize itself to “best deter, detect, deny and defeat current and future, ever-changing threats.”

She specifically mentioned WADS involvement and leading from the front on initiatives and programs such as Advanced Battle Management System (ABMS) and Pathfinder. Pathfinder is an air threat response effort applying machine learning to classify objects and predict threats more quickly which allows an operator to shift focus to decision-making rather than data and signal analysis.

According to Hanson, WADS shows a hunger for technological improvement that is contagious. She explained that she hopes to continue to push these initiatives forward so WADS can be a leader in the defense of Canadian and U.S. homelands.

Hanson has served in the RCAF since 1996. She has qualified in two RCAF occupations: C130 Hercules Air Combat Systems Officer (ACSO) and Aerospace Control Officer (AEC). She comes to WADS from her previous assignment as a Command Center Director at NORAD/USNORTHCOM in Colorado Springs, Colo. While there, she was in charge of the bi-national NORAD/USNORTHCOM crew during 13 months of dynamic COVID-19 sequester operations to support the mission assurance of the 24/7 NORAD mission.

The Western Air Defense Sector is headquartered at Joint Base Lewis-McChord and is staff by active-duty Washington Air National Guardsmen, Royal Canadian Air Force, U.S. Navy liaison officers, and Federal civilians. The unit supports the NORAD integrated warning and attack assessment missions and the U.S. Northern Command's homeland defense mission. WADS is responsible for air sovereignty and counter-air operations over the Western United States and directs a variety of assets to defend 2.2 million square miles of land and sea west of the Mississippi River.