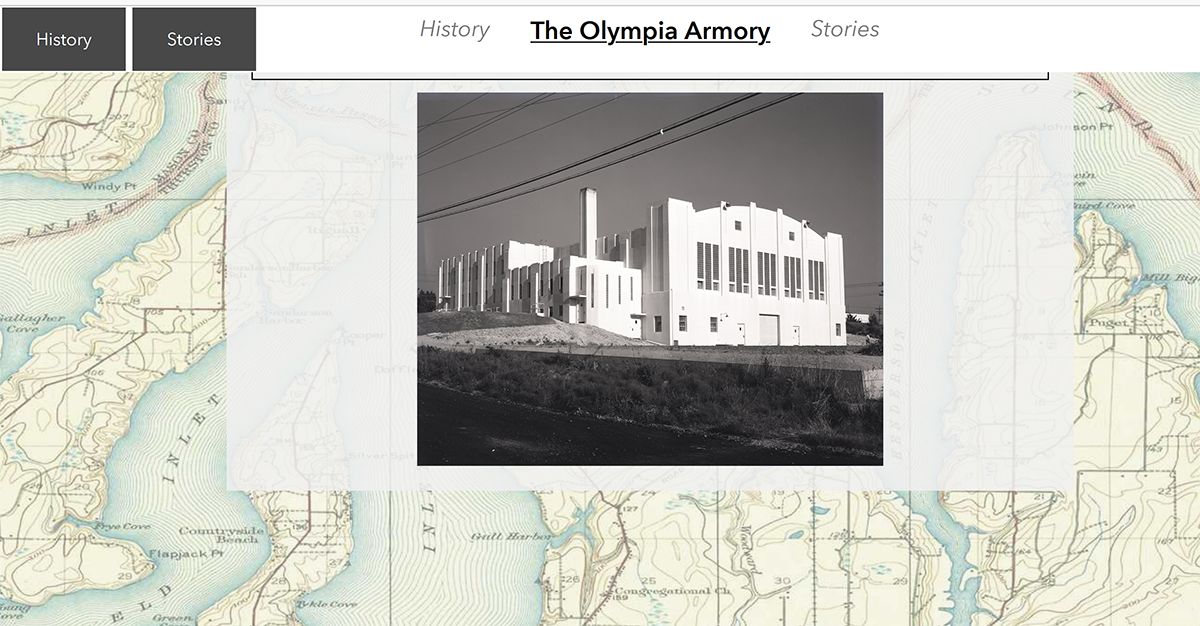 For more than 80 years, the Olympia Armory was a place for dances, community events and, of course, home for the soldiers of the Washington National Guard.

In March of 2022, the Olympia Armory transitioned from a military installation to a creative campus owned by the city of Olympia.

During the transition, the Olympia Historical Society and Bigelow House Museum, Washington Army National Guard, city of Olympia, and many other partners came together to commemorate the life of the monumental building and the lives it has touched.

Stories, photos and memories of the armory were shared with partners and turned into a storytelling project being launched for public use this month. https://wise.wamil.us/CustomApps/Olympia_Armory/

“Ultimately, projects like this are intended to maintain a connection between the history associated with a place and the community,” said George Reed-Harmon, the environmental program manager for the Washington Military Department. “Doing so helps cities maintain some sense of place that has been shown to have other benefits by increasing curiosity and educating people on the cultural resources in their area.”

The storytelling project was a requirement under the memorandum of agreement among the National Guard Bureau, Washington Army National Guard and the Washington Historic Preservation Office for the Olympia Armory Divestiture. Reed-Harmon says the project was also good for the sake of being good stewards of cultural resources in Washington state.

In addition to submitting photos and stories, some sat for video interviews, as well. Besides the website, everything has also been submitted to the state Archives to be preserved.

The project shows photos from the 1954 auto show, armistice parades, even basketball games. Governor Arthur B. Langlie had his inaugural ball in 1941 at the armory.

”Honestly, I look at each person’s account as a unique story that has some intrinsic value,” he said. “As such, I don’t see any one story as better or more remarkable than another. All of these stories take place in the same place but have different meanings — to me that is remarkable.”

Claudia Johnson submitted a story talking about learning how to drive in its parking lot and parallel parking between oil drums. There were memories of the annual harvest festival and basketball practices.

“I don't remember if our team was any good, or if we won any games, but I do remember that I was COLD every time I played there, and the floors were HARD,” said Wayne Olsen.

Virginia McCoy Britt said she remembers volunteering at the Armory during World War II when there were fears of attacks in the Puget Sound.

“Our windows in Olympia had to be blackened at night, as they thought the West Coast might be bombed,” she said. “It was all kind of frightening.”

The 50,000-square-foot armory is an iconic Art Deco style building that was constructed by noted architects Joseph Wohleb of Olympia and Roland Borhek of Tacoma in the late 1930s. The Olympia Armory has been an integral part of the community’s history and the long history of the Army National Guard presence in Olympia. Guard members from the armory deployed to the Pacific Theater during World War II and the Middle East during Operation Iraqi and Enduring Freedom, while continuing to serve our state during countless disasters.

Reed-Harmon says the building is eligible for the National Register of Historic Places, but the decision to apply will be up to the new owners.

The city of Olympia is now moving forward with a new creative campus.

“Community input has shaped the working vision and will continue to guide the project into the future,” the city says on its website.